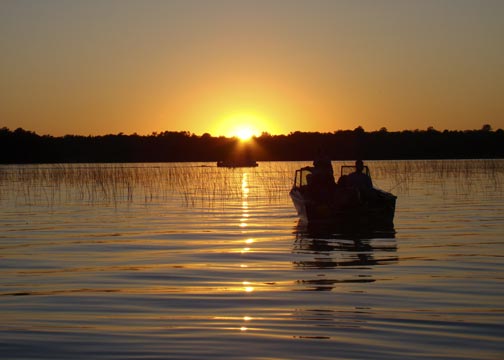 I Say Cisco, You Say Tullibee

Whats For Dinner at Your Lake?

If you are a walleye in Blackwater Lake, we hope your answer is an emphatic tullibee and lots of them! Also as cisco or lake herring, the unassuming tullibee is a protein packed fish vital to walleye.

These feeder fish spend their summer in the oxygen rich cold water under the thermalcline of deep lakes where they feed on crispy bits of plankton. The biomass of this fish is what sustains game fish. If you have never seen a tullibee its probably because their mouths are so small anglers seldom catch them. But walleye and other game fish catch and eat tullibee all the time. Tullibee help keep game fish growing and spawning.

To grow large walleye, northern pike, and muskie it is essential that a lake have tullibee because they are the food source that drives game fish. Essential to tullibee is cold water with lots of oxygen. That is where the deep lakes in the forest of Minnesota come in to play. As heat from the summer sun warms surface, tullibee movedown into the cool depths of the lake. When algal blooms are stimulated by nutrient rich runoff from human development, it leads to dead algae sinking to the bottom of the lake where its decay depletes available oxygen. That squeezes tullibee up to waters with more oxygen. Tullibee need to stay below the warm surface and above the oxygen depleting decay on the bottom. That’s why deep lakes give tullibee the best environment to grow and feed game fish.

The DNR has designated 176 Minnesota lakes as refuge lakes where tullibee should be safe. Blackwater is one of them. Tullibee should be safe from climate changes in these lakes but they are not protected from human development caused algal blooms. There is a way to protect lakes from human caused runoff though. Research indicates that if 75% of the land that drains into a lake is forested, the lake will be protected from runoff that causes algal blooms. Tree roots hold soil in place where it can filter and cool the runoff before it reaches the lake, making it a good place for tullibee.

One of the few things we can do is to sustain and hopefully improve our game fishery is to protect and increase its food source, tullibee.

Minnesota’s record tullibee was caught in 2002. It weighted in at 5 pounds 11.8 ounces.

Blackwater Lake is a 722-acre lake (336 acres considered littoral, i.e. 15 feet deep or less) with 7.5 miles of shoreline and a maximum depth of 67 feet. There is a DNR-owned public access on the north shore of the east bay off County Road 11. The DNR classified Minnesota’s lakes into 43 different lake classes based on physical, chemical, and other characteristics. Blackwater Lake is in Lake Class 25; lakes in this class are deep, clear, and irregularly shaped. Other area lakes in Lake Class 25 are Big Boy, Birch, Girl, Inguadona, and Long.

Blackwater Lake has an extensive history of fisheries investigations that includes 15 investigations dating back to 1959. DNR fisheries investigations are typically carried out using gill nets set on the bottom of the lake to sample deeper water fish species, trap nets to sample near shore populations, and in some cases spring electrofishing to sample bass populations. A creel survey was conducted on a number of lakes in the Longville area in 2007 and included Blackwater Lake. A creel survey consisted of a clerk interviewing anglers which was used to estimate fishing pressure, catch rates, and harvest. The 2007 creel survey found that sunfish and black crappie made up the majority of the harvest on Blackwater Lake with 53.8 and 19.4 percent of the total harvest, respectively. However, largemouth and smallmouth bass accounted for the majority of the total catch (55.3 percent). Walleye catch and harvest rates were above or near the middle value for Lake Class 25 lakes. The average length and weight of harvested walleye in the 2007 creel survey was 17.52 inches and 1.90 pounds.

Blackwater Lake has a history of being a very good lake for catching largemouth bass. Experimental regulations were implemented in 2004 designating Blackwater Lake as catch and release only for largemouth and smallmouth bass. The goal of this regulation was to improve the size structure of largemouth bass and protect large smallmouth bass from harvest. This regulation was converted to a 12 inch maximum (all bass 12 inches in length or longer must be immediately released) in 2010. Spring electrofishing is our primary tool for assessing the largemouth bass population in Blackwater Lake. Catch rates ranged from 34.56 to 89.83 fish per hour in past assessments. The most recent assessment (2009) caught 89.14 fish per hour, but there was no significant change in catch rates between the pre-regulation era and the post-regulation era. However, the proportion of larger bass in electrofishing samples was higher in the three assessments since the special regulations went into effect than in all prior assessments. A full evaluation and review process to determine the effectiveness of this regulation will occur in 2016.

Walleye stocking in Blackwater Lake began in the 1950s with fingerlings, and stocking occurred in 29 years during this 60 year period. Most recently, walleye fingerlings were stocked in Blackwater Lake in the fall of 2006, 2008, and 2010 as prescribed in the current lake management plan. The current stocking regime will be evaluated following a fish population assessment that will be carried out this summer. Walleye numbers in the gill nets, our primary tool for assessing relative abundance, ranged from 1.42 to 4.00 fish per gill net in past investigations. Historical walleye gillnet catch rates in Blackwater Lake fall within the normal range (i.e. between the 25th to 75th percentile) for all Class 25 lakes in Minnesota (1.25 to 5.50 fish per gillnet). Walleye catch rates have been relatively stable in recent assessments with catch rates above three per gillnet in four of the previous five assessments. The most recent population assessment in 2008 caught 3.92 walleye per gillnet.

The reason for the different numbers of fingerlings for a similar weight of fish across years is due to differences in sizes of fingerlings. Fingerling size is influenced by a variety of factors including growing conditions (length of summer growing season, water temperatures, etc) and where the fish were raised (different ponds produce different sizes of fish, etc). Most of the fish in 2006 and 2008 came from DNR ponds in the Glenwood Area. The fingerlings stocked in 2010 were purchased by the state from a private grower. There are not enough suitable ponds in the Walker area to grow our own fingerlings so the DNR often will rely on other DNR Area Fisheries or private growers to provide us with our fingerlings.

Northern pike gill net catch numbers have been following a noticeable upward trend since the early 1990s. The most recent gillnet catch rate (2008) was the highest ever recorded in Blackwater at 11.42 fish per net. This is higher than the range typical of Class 25 lakes (3.13 to 8.50 fish per gill net) and nearly three times higher than the 1991 catch rate of 4.13 fish per net. In 2007, lake association members participated in ice-out trap netting to remove small northern pike with the goal of reducing overall northern pike numbers and improving size structure. While some northern pike were captured and removed, the numbers were not high enough to have a significant impact on the population.

Yellow perch, the primary forage species for walleye and northern pike in many Minnesota lakes, have historically been stable but relatively low in numbers in Blackwater Lake. The 2008 assessment caught 2.17 yellow perch per gill net, lower than the normal range for Class 25 lakes (2.50 to 24.17). Yellow perch gill net catch rates ranged from 1.67 to 7.88 fish per net in past investigations. Blackwater Lake has a stable and relatively high number of bluegill based on trap net catch rates dating back to 1959. Trap net catch rates have historically ranged from 29.22 to 66.58. The 2008 assessment caught 33.75 bluegills per trap net, which is within the normal range for Class 25 lakes (5.61 to 42.27 bluegills per trap net). Bluegills up to 7.8 inches were sampled in 2008. Black crappie numbers in assessments have historically been low, ranging from 0.08 (2008) to 3.83 per trap net. Black crappie up to 11.73 inches were sampled (spring electrofishing) in 2008. Other species sampled in Blackwater Lake include smallmouth bass, tullibee, white sucker, rock bass, pumpkinseed sunfish, bowfin, brown bullhead, and yellow bullhead.

The Walker Area Fisheries office plans to conduct spring electrofishing targeting bass this year on Blackwater Lake. In addition, a population assessment is scheduled for early July using trap nets and gill nets. You may also see a creel clerk on the water this summer interviewing anglers. This clerk will be collecting information on species targeted, times spent fishing, and catch and harvest numbers to determine total fishing pressure, catch and harvest rates, and angler demographic information on a number of lakes in the Longville area, including Blackwater. The information collected will help manage the Blackwater Lake fishery and your participation is greatly appreciated. Feel free to contact the Walker Area Fisheries Office at 218-547-1683 with any questions or to request more detailed information. You can also email Doug.W.Schultz@state.MN.US for more information or any questions you may have.

To see the results of the MN DNR 2011 Fish Survey for Blackwater Lake click here.