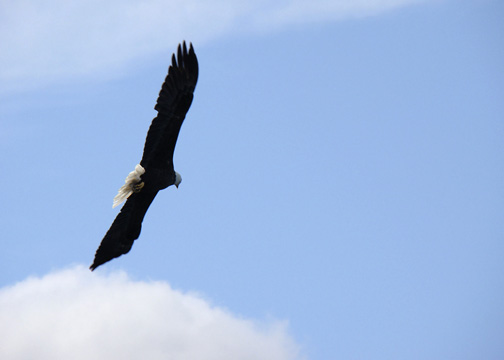 The torch has been passed (so to speak) to new co-Marshals of the 4th of July Boat Parade this year.  Cindy Larson and Peggy Skalicky are honored to accept the organizing tasks going forward (until they tire of it), and would like to thank Barbie Laughlin for starting and marshaling the boat parade for the past 20 (or so) years.

Also new this year, to encourage everyone to participate, will be a trophy and prizes for the Best Decorated Boat.  An entry number for each boat will be handed out when parade participants line up at the start of the parade, and a voting ballot will be distributed to each boat.  Ballots will be collected following the parade when entrants make it back to Little Blackwater Lake, and prizes will be awarded shortly thereafter.

So start thinking of how you’ll decorate this year, and let’s see how creative everyone can get.  Your theme doesn’t have to be strictly patriotic, it just needs to be fun!

Late Ice Out on Blackwater Lake
by Tim Marr

After a tough snowy winter and a long cold spring, the Blackwater Lake pretty much ice free today, May 13. This is the latest ice out in recent history.

When Jan and I bought the little cabin that stood where our house is today, we discovered that a former owner had recorded the ice out dates from the 1960’s and 70’s. Then there was a gap in the data until we started recording the dates in 1998. We now have 30 years of records. While that is not really a very long period of time when considering natural events like the weather, it is still interesting to note that in only 30 years, the date of the ice out has varied more than 7 weeks from the earliest date of March 25, set in 2012 to this year’s date of May13. The “average” ice out date for Blackwater Lake remains at April 20.

The Department of Natural Resources has records showing that late ice outs have occurred before.. An article in the Brainerd Dispatch last week gave the latest ice out dates for a number of lakes around the state. A couple of notable ones were Lake Itasca, May 18, 1950 and Leech Lake, May 23, 1950.

Anyway, its is fun to look out the window right now and see the sun shimmering on the little waves. Now we can put in the docks and the boats and begin the activities that we all enjoy so much in the “open water season”.

You say tullibee, I say cisco but walleye say dinner at Blackwater Lake!

Blackwater Lake is declared one of the forty best tullibee water sheds in MN, land of 10,000 lakes.

Also known as cisco, tullibee are seldom caught because their mouths are too small for most fishhooks. These fish feed on tiny crustaceans and insect larvae. They are in turn a primary food source for walleye and other game fish.

The Clean Water Legacy Forest Stewardship Project- Tullibee Lake Watersheds is promoting this silvery member of the salmon family as the “canary in the coal mine” species for cold, clear, oxygen rich lakes. Slight changes in water quality negatively affect tullibee populations so the Cass County Soil and Water Conservation District (SWCD), and the MN DNR Forrester have combined to protect tullibee by protecting the forests that hold rainfall and reduce runoff into prime tullibee habitat.

Landowners with 20 or more acres, who will be leaving ten or more of those acres wooded, are being offered a low cost forest stewardship plan and possible tax reductions for participation in forest land incentive programs. Interested land owners should contact Kelly Condiff at the SWCD (218) 547-7246.

For more information on the relationship between fish and forests go to:

A no wake advisory has been posted for Blackwater Lake. High water and fragile
shorelines have Blackwater Lake users slowing down near shore and using the center
of the lake for wave creating recreation. Sheriff Tom Burch reported an effort to
encourage boaters to voluntarily travel at no-wake speeds on lakes having high
water levels to prevent shoreline damage has had a positive response.
Thank you to everyone who has slowed down.