Use catch and release to protect fish that are spawning and relieve fishing pressure through out the year.
Your grandchildren will thank you.

Many anglers practice catch and release during spawning season to benefit the fish population by allowing fish to spawn and protect their nests.  Fish protecting nests are especially vulnerable. With out care and protection eggs can suffocate under a layer of silt, succumb to fungal infections or be eaten by predators. Look for spawning nests and when you see them, return spawning fish to the water where you caught them.

Look for spawning fish and use catch and release methods or better yet observe them with out interference. 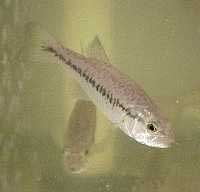 Bass spawn in solitary nests from May to July when the water is 60-65 degrees F.

Sunfish nest in colonies along the shore. Sunfish spawning peaks in June and may continue into August, but ceases when water temperatures reach 80 degrees F.

As soon as the ice breaks up in spring in , Northern Pike spawn where sedges, rushes and plants are in a foot or less water.

In late April and early May, Walleye migrate to areas with gravel bottoms to spawn when the water is 40- 55 degrees F.

Perch prefer to spawn on vegetation where the gelatinous strands of eggs can extend up to 7 feet long.  Perch spawn from April to early May in 44 to 52 degree F. water.

Crappie spawning occurs in the shallows and peaks in May to June when water is 61 to 68 degrees F.

Barbless hooks (file or flatten with a pliers)

Set hook quickly so fish doesn’t have time to swallow it.

Don’t exhaust the fish by playing it on the line too long. Fish become weak and susceptible to disease when they are played too long.

Wet your hands before handling a fish, this minimizes removal of the slime that protects fish from fungal infections.  Fish bruise easily so handle them gently, grasping behind the head, never by the eyes or gills.  Handle the fish in the net to avoid dropping them.

Turning a fish belly up as you remove hooks disorients and quiets them as you remove the hook. Use a needlenose pliers to remove hooks from the jaw.  Cut the line next to the mouth if fish is deeply hooked, stomach acid will dissolve the hook.  Work quickly, keeping fish out of water more than 15 seconds damages their gill tissue, especially in cold weather. 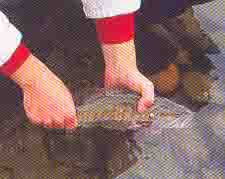 Gently ease fish into the water.  Revive tired fish by gently holding its tail and slowly moving it back and forth in the water so that water flows over the gills.  When it has recovered the fish will swim away to protect its young or be caught another time.