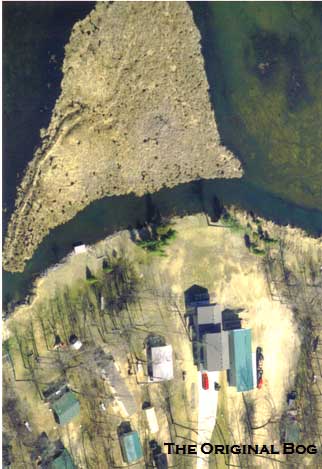 The famous bog, approximately one acre in size, broke loose in the spring of 2005 traveling around the lake doing damage to docks and boat lifts. The association board got together and put a plan in place with the county board and DNR approval to move the bog back to the county land that was previously purchased by the Blackwater Lake Association with the help of the Leech Lake Water Shed Foundation. The bog was moved with several pontoons and boats pushing it back in front of this county land and staked it down with several steel posts. In December when the lake froze over residents that stay here during the winter went on top of it to better stake it down. It appeared that we were successful until we had a strong wind out of the north in the spring of 2008. The bog floated across the main part of the lake heading in a southeasterly direction and stopped in front of Dick Thompson’s residence, blocking him from having good access to the lake. The board got back together again and decided to try and move it back, with DNR approval. We tried but were unsuccessful. We then decided to cut a channel through the bog to allow Dick access to the lake and were successful in doing that. Putting several small pieces back in front of the county land and staking them down. In the spring of 2009 a portion of the bog floated up into The Pine Hacen Resort bay and did some damage to one of the lake residence docks. The board then decided that staking it was just not working and decided that removal was our only other option. With DNR approval we removed 310 yards that spring and found that it went really well. We then decided to ask for donations to remove the rest of the bog. In the spring of 2010, we removed 920 yards and are now asking for more donations to continue the process.

Take a look at the photo gallery of this web site to see the removal process.